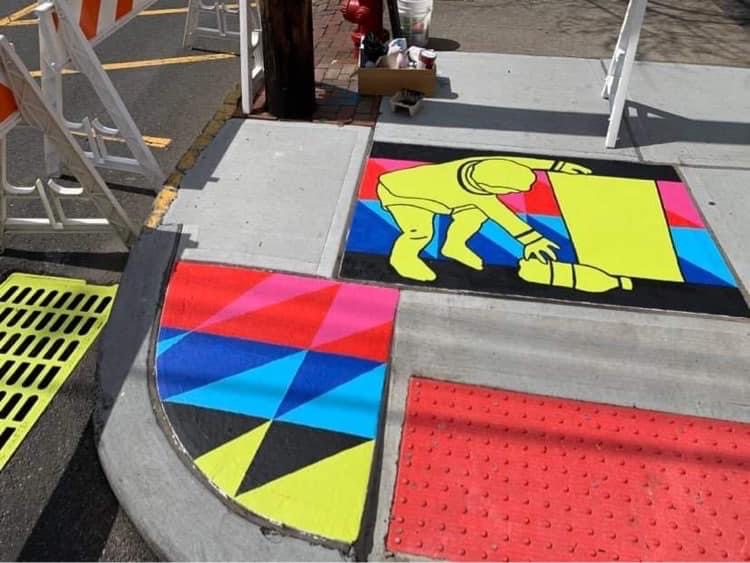 Perth Amboy Artworks presents 5 catch basin murals in celebration of Earth Day.  Artists have been busy painting catch basin murals to raise awareness about our stormwater infrastructure. Keeping these street drains clean is important for protecting our water and preventing flooding. The Perth Amboy Youth Alliance and local residents have adopted these catch basin murals and are volunteering to keep them clean from litter and debris.

The Perth Amboy Catch Basin Mural Project was made possible by the Perth Amboy Clean Communities Program and local donations. The colorful environmental, nautical and anti-litter themed catch basin murals give artists work and educate residents where water goes. The murals draw attention to the need to protect our water from litter and create opportunities for education about flooding and the impact of climate change. The project helps to clean up the city by creating volunteer opportunities and empowers youth to make change in the community.  Shout out to Joas Quiles and Geri Barcheski from DPW Clean Communities for their innovative work to help keep Perth Amboy beautiful.

The Catch Basin Mural project would not be possible without the incredible artists who designed and painted artwork for the catch basins. Shout out to the Catch Basin Mural artists Sarai Lourdes, Marcelino Garcia, Ariana Febles, Albertus Joseph, and Jonathan Horowitz.  First the artists picked themes they wanted to explore in relation to the project, then drew drafts of their ideas, and then coordinated their busy schedules to complete these murals in time for Earth Day. We are grateful for the amazing work the 5 artists did on the mural project. Learn more about each artist in the artist profiles section.

Caroline Pozycki Torres, chair of Perth Amboy Artworks, said “It’s been a wonderful experience working with the artists, Arts Council, Youth Alliance, volunteers, residents and City to get this project done for Earth Day. I am honored that I and Perth Amboy Art Works were able to facilitate the Perth Amboy community to come together for this wonderful expression of Art and Environmental Awareness in our City. ” Mayor Helmin Caba said “Thank you to everyone who worked to make the Catch Basin Mural Project a success.”

Perth Amboy resident Donna Chiera, President of the AFTNJ, adopted a catch basin in her neighborhood. Donna said, “it is great to see our young residents taking pride in our city and an interest in our environment.   We all talk about giving back and these individuals and organizations are actually doing it.  It is comforting to know the future of our city will be in caring hands.”

Keeping catch basins clean allows rain to drain and helps prevent local flooding from super soaker rain events caused by climate change. The east coast climate change pattern is to dump extreme rainfall.  Perth Amboy residents can help to prevent local flooding by adopting catch basins and helping to keep them clean. We have seen rain events in Perth Amboy where heavy rain falls in a short period and causes local flooding when storm drains are blocked.  Recorded rainfall from a storm last fall was between 1.5-2 inches in an hour. Anything over 0.5″ in an hour causes urban flooding.

This Earth Day Adopt the Catch Basin in Your Neighborhood
We are calling on Perth Amboy residents to adopt their local catch basin. You can make a positive impact by volunteering to help keep your catch basin clean. Use a broom and dust plan to sweep up litter, leaves, grass clipping, and water bottles that collect on top of the catch basin. Throw the trash away in the garbage. During rain events, check to make sure that nothing is blocking the catch basin. If you feel as though your catch basin needs more attention, or you see flooding, you can give Perth Amboy Public Works a call (732) 826-2010.

Sarai Lourdes has had a fascination with art from a very young age. She still likes to find objects in clouds and the perfect snowflake. Growing up a border kid in Mexico allowed her to value the importance of conserving things as a means to a living. Her family shared everything. Moving to Texas in her teenage years had its share of culture shock. One of the first things she remembered was the use of water that she was not used to. People did not think of limiting what they used because they did not have to. But did that make it right? Today, Sarai, like many artists, are speaking out on the importance of conserving natures resources.  Recently, Sarai held a gallery exhibition at the Perth Amboy Gallery Center for the Arts.

Ariana Febles was born to Puerto Rican parents and raised in Perth Amboy NJ. She was first introduced to art at Perth Amboy High School. Mrs. Massopust was her very first inspiration. She motivated her in many forms of Fine Art. Ariana continued her studies at Traphagen School of Fashion in New York City where she studied fashion design and illustration which she encompasses in her work. Ariana’s influences include the works of Jackson Pollack, Joan Miro, and minimalists like Donald Judd and Mondrian. She also does street art and has painted works throughout the five boroughs, New Jersey and Puerto Rico. She sold out on her very first exhibit which consisted of her abstracts and pop art painting. Her work and style consist of pop art, iconography, minimalism, and high fashion color studies. She is currently working on doing more street art and building her new body of work in her studio.

Jonathan Horowitz is a writer, painter, translator, educator, and muralist from Highland Park, New Jersey. Horowitz has over fifteen years collaborating with organizations and municipalities throughout New Jersey and New York on community-oriented projects. Horowitz has completed murals in Metuchen, Highland Park, New Brunswick, Newark, and Orange. He has also assisted on “The {PORTRAITS}” mural at McCarter Highway in Newark, the second longest mural in the U.S., as well as “Birds of Paradise,” a 500-ft long mural at Bayswater Park in Far Rockaway, supported by NYC Parks. Horowitz completed his MFA in Fiction with a Literary Translation at Columbia (LTAC) joint course of study at Columbia University in May 2020. He is currently working on his first novel.

Albertus Joseph is a native New Yorker born in East Elmhurst Queens New York. His mother was an artist and was his first influence as a young child in art.  He attended Mason Gross School of the Arts at Rutgers University where he studied Art History, classical fine art painting and sculpture. He has worked as a fabricator, welder, motorcycle mechanic, carpenter and an interior designer where he draws many of his influences from. His style is a combination of Art Nouveau, Art Deco, Graphic Novel, meets Pop Art with a twist of classical Fine Art painting. Albertus has sold both sculptures and paintings nationally and internationally. He has exhibited works all over the Metropolitan area and has received mayoral citations and awards throughout his career as an Artist. His work is both spiritual and inspirational often depicting the human form and portraits of people who inspire him. “My goal as an Artist is to find inspiration… to be inspired and inspire others in the process or being a creative.” Like many artists he finds the process of creating very therapeutic to the point of having to be in the studio as much as possible. “Wanting to be a better Artist takes being a better person… the process of being and being in the process are one in the same.” Albertus also loves to collaborate with other artists and has done so on many projects.

Marcelino Garcia is a multi-faceted artist with talents ranging from performance to gallery-based efforts. A native of New Mexico with a degree in theatre and dance from University of Texas, Austin, Marcelino ties his love of culture to his surroundings. Having spent over 10 years living in Perth Amboy, NJ, he has always been a champion for the betterment of the community through social justice, education & art. Recently, Marcelino held a gallery exhibition at the Perth Amboy Gallery Center for the Arts that yielded a mayoral citation from Mayor Caba for his contribution to the visual and performing arts for Perth Amboy. Marcelino was also asked to be on the committee for arts in preparation for the art festival.